Year 1 of the Portland Horror Film Festival was chock full of the bloody best in independent films. With submissions from all over the world, spanning all sub-genres of horror, including accomplished student films as well as highly polished indie films, our jury had a ghoulish job picking the award winners.

We would like to express our profound gratitude to the audience and the filmmakers who trusted us with curating this memorable and unique two-night event. With limited program time, we selected less than 20% of the films that were submitted, so every film we played is already a true winner… top of the heap, king of the hill! We’d also like to give a sanguinated salute to the filmmakers who graced the stage for Q&A: Nicole Bird (Mirrored), Jared Steiner and Todd Gardiner (Last Caller), Riley Leggin (Eternal Coma, 1994), Christoff Molesworth and Donny Persons (The Bends), Sheri Deterling and Rachel Haynes (Daylight’s End)! You are the best! Thanks for supporting a small indie festival and speaking to our audience. Without you it wouldn’t be a fest… we’d just be showing movies.

Special thanks to our Guest Judge, Gregg Hale (Producer – Blair Witch Project, Creator – FreakyLinks), and our special Jury for helping us watch hours of films! Each award winner will receive a Winner laurel and a big black marble award; useful for remembering their participation in Portland Horror Film Festival, as well as for bashing in the heads of intruders or possessed loved ones (we were gonna make the awards saw blades, but figured that would be too easy for possessed loved ones to use against you).

And the winners are:

“Kookie” featured a high degree of polished cinematography and sound design, with excellent writing and direction, and perfect pacing. It especially showcased amazing performances from both stars Ava Jamieson (as Bree, with impeccable comic timing, as well as heart-rending fear) and Alana Harding (as her caring but slightly devious mother). With a perfect mix of comedy, threat, horror, and strange acceptance, Kookie was our favorite overall film.

Seemingly a throwback to the 1980s teenage comedies of John Hughes, in everything from the music to the quirky best friend, the quaintness dissolves when injected with a modern dose of horrifying body dysmorphia that manifests itself in abject terror. “Pigskin” was skillfully tense, eye-coveringly visceral, painfully emotional (it made a lot of us cry), and featured wonderful direction and performances. 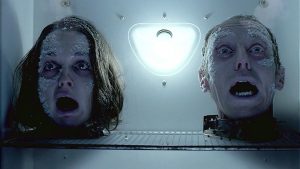 “The Barber’s Cut” is a humorously ghoulish treatise on the re-animation genre, featuring excellently comedic performances from its two “head” actors, and was chosen as favorite by our guest celebrity judge, Gregg Hale, producer of The Blair Witch Project and creator of TV show Freakylinks. With other numerous horror credits, Gregg knows his stuff and chose very, very wisely. 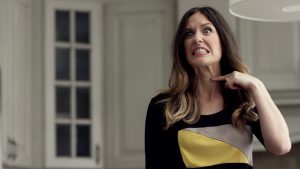 What can we say? Our audience is one of the most engaged and intelligent movie-watching audiences in the world, and they know good stuff when they see it. Despite being one of the last films we showed, in a late night block, “Kookie” still garnered enough audience votes to handily wrest the audience choice award away from the rest of the contenders. 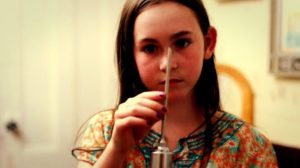 When so much horror is mired in the same old thing (and, really, studios are big fans of rehashing working formulas in ever-growing corporate franchises), it takes independent filmmakers to push into fresh bloody territory. That’s what this whole festival is about, but what do you do when fresh just isn’t “fresh enough?” Sometimes it takes a 10-year-old, working from a plot idea she conceived when she was only five, concerning a young girl’s use of time travel to find closure with her deceased father. Clever and heartfelt, while still managing to be pleasingly gory, with a twist you would never have thought of yourself, “Daddy Dearest” by Fiona Fright is a breath of fetid air from someone we really, really, really want to see continue to make movies (are you reading this, Fiona? Don’t stop being awesome). Fiona wrote, directed (with co-directors Stacy Buchanan and Andrea Wolanin), and starred in the film, alongside festival favorite Diana Porter (“Dark Roast”, “Innsmouth”) as the heartbroken mother doing her best to care for her precocious daughter. 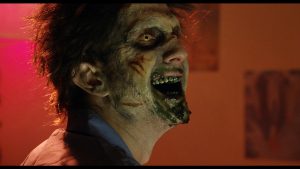 For us, Comedy is a big part of Horror… sometimes it’s just to relieve the tension at stressful moments. Sometimes, the film itself is a bloody, gooey, laugh riot with perfectly timed comedy, over-the-top gore, frenetic action, hilariously relatable characters, and a foul-mouthed demon baby, just like our favorite “Larry Gone Demon!” Comedy and horror are two great tastes that taste great together… you know, like Chocolate milk and demon feces (maybe you had to be there?). Shaun of The Dead has nothing on “Larry Gone Demon!”

So, where can I see these films?

Most of these films are on the festival circuit, and won’t be available on home media or through streaming sites anytime soon. However, you have a great chance at seeing them by attending a local horror film festival. Guess what? Most cities have them! Look in your local entertainment paper, or search on-line for “[Insert your city name here] Horror Film Festival.” There’s probably one up the street from you. Go to it, and you’ll see horror that is smarter and scarier than almost any big studio horror film! You’ll also be supporting indie film and the local theaters that cater to it.

We hope you will join us next year for more of the best in independent horror!